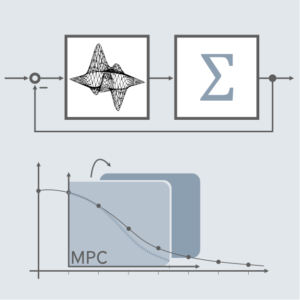 One research focus of the Chair of Automatic Control is on the development of nonlinear and (model) predictive control schemes as well as path/trajectory planning for dynamical systems. An important aspect in this regard are real-time feasible algorithms and their embedded hardware implementation for highly dynamical applications.

Model predictive control (MPC) is a modern control scheme that is particularly suitable for nonlinear systems (NMPC) with multiple control inputs and state/control constraints (e.g. actuator limits, safety constraints, etc.). The main research focus at the institute is on the development of highly efficient and real-time feasible MPC schemes as well as the hardware portability of the corresponding algorithms, e.g. for dSPACE, PLC and ECU hardware. Besides the methodological research and algorithmic development, the application of these real-time MPC schemes on different mechatronic systems is subject of various industrial research projects.

The computational efficiency of the (nonlinear) MPC schemes is achieved by tailored suboptimal/real-time implementations that are based on the approximate solution of the underlying dynamic optimization problem with incremental refinement.

Part of the research was implemented within the open-source toolbox GRAMPC that implements an efficient (projected) gradient method with adaptive line search. GRAMPC allows for a convenient setup, tuning and utilization of the MPC scheme for highly dynamical systems with sampling times in the (sub)millisecond range or high-dimensional systems. GRAMPC contains an additional interface (GUI) to MATLAB/Simulink.

Complex systems or highly dynamical systems such as mechatronic systems with sampling times in the (sub)millisecond range pose significant challenges for the real-time feasibility of optimization based methods, in particular in the presence of constraints. Focus at the institute therefore concerns memory and computation time efficient algorithms for online optimization and model predictive control that are suitable for hardware implementation with limited resources (embedded design).

The interfacing to standard soft- and hardware allows for a straightforward integration and simulation under Matlab/Simulink as well as the direct implementation on real-time hardware (e.g. dSPACE). The methods are used for efficient implementation on PLC and ECU level within several industrial projects and cooperations.

A focus of research is on modular, distributed systems, which are composed by a large number of physically coupled subsystems. An example for this kind of systems is a smart grid. Distributed algorithms are predestinated to control high-scaled distributed systems. A popular way is to adapt model predictive controllers (MPC) for distributed systems. In this case, they are called distributed model predictive controllers (DMPC). The research in the environment of DMPC has several fields for research. One is the development of efficient algorithms, which ensure optimal behavior based on shared information and the investigation of stability guarantees for the controlled system by using decomposition schemes and parallel computation. Another field of research focuses on the consideration of the physical coupling between the subsystems. If information about the dynamical behavior of the neighbor of an agent is given, it can be considered in the optimization algorithm. As the considered system is both complex in dynamics and high-scaled, the implementation of controlling algorithms is challenging. To solve this issue, a framework is developed at the chair of automatic control, which uses the modularity of the network for a clear and simple usage. If the network is changing, the framework is able to automatically adapt its algorithm. This framework is used for the controlling of a scalable spring-mass system. The masses represent agents. Each of the agents are fully actuated and the size of the network is varied for the first simulation example. The simulation result for 100 agents is presented in the following video.

It is numerically shown, that the computational effort for each agent is mostly independent of the number of agents. This shows the predestination of the used algorithm for high-scaled distributed systems. Only the outer agents are actuated for another simulation example. As the agents are not able to directly control their neighbors, the controlling task can only be solved with the usage of communication. This task can be solved by using DMPC as well. The simulation result can be seen in the following video.

The software framework GRAMPC-D has been used to control the robots of the Robotarium¹ for the sake of an experimental validation. At first, a distribution problem was considered, whereby the robots have to maximize their distance. The second scenario evaluated a formation control problem. The robots form the letter “G”. The last scenario considered a platooning scenario whereby the first robot drives to desired positions while the others are following. Thereby, the last robot of the platoon was plugged out and plugged in again.