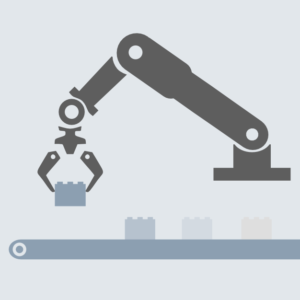 Robotics belongs to the largest fields of application for control engineering methods. Besides conventional industrial robots, as known from the automobile production, there is an increasing usage of collaborative and mobile robots, for example as vacuum cleaners or autonomous vehicles. Research projects in this area concern the control of movements and forces on the one hand and the planning of paths and trajectories on the other.

When the robot is in contact with its environment, the forces and moments that arise must be taken into account by the control system. The challenges include the contact modelling, e.g. stiffness and friction, the safe handling of contact loss, or the selection of controller parameters for different applications.

In order to meet the demand for versatile and flexibly applicable control methods, the Chair of Automatic Control develops a model predictive interaction controller. Here, differenct objectives such as position control, direct force control, impedance control, or hybrid variants can be realized by a generic control framework. Safety aspects can be explicitly considered by limiting the maximum velocities or forces.

One possible field of application is the generic implementation of assembly tasks. The task can be decomposed into a sequence of motion and interaction primitives, where each primitive is represented by a specific parameterization of the model predictive interaction control. In order to reduce the effort for parameterization, the use of learning-based methods is investigated.

One of the basic functions of a robot is to move efficiently between different configurations or along trajectories. A challenge is the predictive control of robot arms taking into account the nonlinear rigid body dynamics as well as constraints. A real-time capable implementation is only possible with specialized algorithms that exploit the structure of the optimization problem.

Another field of research is the development of real-time predictive motion planning methods for driving simulators. By using modern nonlinear model predictive control approaches (MPC), the actuator constraints and the future reference values can be directly incorporated into the motion planning, which is not possible when using the classic filter-based approach. This enables a dynamic prepositioning of the simulator and leads to a better exploitation of the simulator potential. Since the future desired values in the online driver-in-the-loop application are dependent on the driver inputs and thus unknown, the future human driving behavior needs to be estimated in a suitable way in order to fully exploit the predictive potential of the approach. Another aspect in this field is the consideration of perception models to take the mechanism of the human motion perception into account.

If the position of humans and objects in the workspace is detected by sensors, safety can be improved by collision-free motion planning. The challenges are the high number of degrees of freedom of a robot arm, the complex collision detection and the limited computation time, when the environment changes frequently.

Research at the Chair of Automatic Control concerns on the one hand the method of dynamic roadmaps, which enables global path planning in less than 100 milliseconds, and its efficient extension to dual-arm robots. On the other hand, optimization-based methods are investigated, that allow taking constraints into account, e.g. closed kinematics.

Furthermore, collision-free path planning also plays a major role in the fields of mobile robots and autonomous vehicles. The task is particularly challenging when vehicles with multiple trailers are considered, since the computation of feasible motions is very complex for this system class. Research at the chair concerns the method of state lattices, which is based on precomputed motion primitives and an efficient graph search.